Anna Quindlen came late to my reading table. Oh, she’s knocked on my reading room door, but I was far too engrossed in thought-provoking classics and reflective theology to pull myself up and answer. That is, until a few days ago when I was looking for lighter fare. Something I could swallow in big bites and enjoy without feeling too full.  And, then, without warning or fanfare, there she was. Waiting on the bookshelf, like a dear friend who’s all dressed up for the party and patiently sitting, while you painfully try to decide what to wear — Lots of Candles, Plenty of Cake.

Anna speaks of “ebbs and flows” in friendships among women in her chapter on “Girlfriends,” admitting that, perhaps, it has a lot to do not only with where we are in life, but where we are inside ourselves. I’d go a step further and add that how our lives were as girls, as teenagers, has probably shaped not only how we are as women now, but also how we communicate and bond with women as friends and in our families.

Virginia Woolf once said, “I have lost friends, some by death, others through sheer inability to cross the street.”  It’s been said that Woolf suffered from mood swings and it affected her social life greatly.  We’re all familiar with the idiom, “making a mountain out of a mole hill,” but what of allowing curbs to become stone walls, boundaries that ultimately make us more of a target for self-destruction than they do shielding us from outside hurt?  Like Prince Prospero in Poe’s, “The Masque of the Red Death,” we don’t want to find out too late that our chances for survival would probably have been far greater had we not cloistered ourselves away, surrounded only by those friends and family we presumed would keep us safe. As Anna states, “connection to another human being is both soothing and scary, at once threatening and essential, because it reflects the tension in all of our lives between individuality and community.” 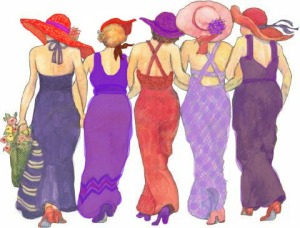 “We trust our friends to tell us what we need to know, and to shield us from what we don’t need to discover,” says Anna. When she was a teenager, Anna reminisces about her father and how he often wondered what she could possibly have to talk about with her girlfriend, when they just saw each other earlier that day, “I could hear my father…as I lay on the kitchen floor, my feet propped against the wall, curling the long cord of the wall phone around my finger with its ragged bitten nail.”

This made me think of my sister and me. I know that the scene Anna describes, talking to her girlfriend on the phone — regarding her father’s annoyance with the aloofness of a normal teenager — never happened in my world. I doubt if it did in my sister’s either. We didn’t grow up together and our teen years were individually wrought with hardships that the young should never have to endure.  Neither of us had strong, loving female role models in our early years. Women who we could observe cultivating bonds in friendships that would span a lifetime.

In our worlds, separated by different fathers and distance, women were too busy being independent. They were self-absorbed with their own desires and dreams. When they weren’t primping and pampering their personas, they were self-medicating their inner demons with liquor and prescription drugs. Their families, friendships, marriages, and their children became casualties of relationship wars. They built curbs, because it was easier to isolate themselves from intimate relationships than to “cross the street” and risk feeling uncomfortable. 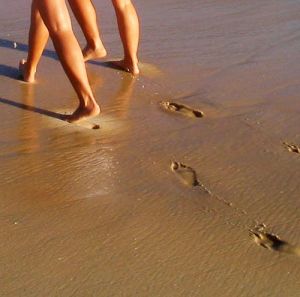 Over the years, I’ve pondered on and about how silly that was, and still is.  We emotionally plaster ourselves with motivational posters, stating how we want to break free of others and just be ourselves. In essence, we’ve traded the “liquor and prescription drugs” for feel good slogans that still have more to do with alienating ourselves than pursuing personal relationships.

I have a handful of really, really close friends. They are I-love-you-but-you-need-to-hear-this girlfriends. It’s taken decades of nurturing and tending to grow them. I also have a few uber special friendships. Friendships seeded in youth that needed fallow time, before they could fully germinate and blossom into don’t-you-ever-think-for-a-moment-that-I-didn’t-miss-or-love-you girlfriends.

However, I wasn’t there to witness how my sister handled, or didn’t handle, the experiences and people she encountered for most of her life.  Unlike my girlfriends, I wasn’t there on her “terrible, horrible, no good, very bad” days to offer a shoulder and share her burdens. We’ve only been Mapquesting family territory for about eight years. When you consider we are both in our fifties now, that still leaves miles and miles of uncharted relational terrain.

What I do know is that when it came to my own life, I chose not to let horrible experiences define my character. What I do know is that when it came to the people I met along the way, I chose to cross the street and take my chances. And, oh, Honey, if I wasn’t plowed down while crossing the street, I was sometimes bruised and battered by the person on the other side. What I do know is that when that happened, I vowed not to let it influence future relationships. Did I get hurt? Sure. Sometimes physically as well as emotionally. Did I feel stupid? Definitely. Did I stop believing in the inherent goodness of people? Never. Do my past experiences sometimes pop up and attempt to sabotage the present? Why, yes. Yes, they do — and I am reminded that I am still human and fallible. For me, though, alienation from others isn’t an option. Silence can be toxic.

One of my all-time favorite quotes is from Brad Pitt’s character, David Mills, as he talks to his partner, William Somerset {Morgan Freeman}, about Somerset’s pending retirement, in “Se7en” — a movie where the complexities of relationship unfold during the pursuit of a serial killer:

Because, David Mills, knows. He knows that it’s easy to think our way out of believing we have the desire to connect intimately with other people. He knows that when people tell you that they are not emotional, that it’s a lie.  He knows that we all think and we all feel.

As women we need to crack ourselves wide open with each other. We need to embrace what it really means to connect with our sisters and our girlfriends. We need to Captain the relation-ship our daughters are sailing on. We’re the only ones who can.

Whether with friends or family, relationships, real relationships, are messy. Like David Mills, I know that. I’ll own that. What I won’t do is refuse to cross the street. I won’t quit. I can’t.

So keep the candles and don’t frost the cake. I’ll eat it anyway.

How do you nurture and maintain relationships with your girlfriends, your sisters, your female relatives and /or your daughters? Please comment and share your insights. I’d really love to hear them.